Darn you Daily Create sending me down a creative rabbits hole.

And I’m responsible for today’s challenge

I look for patterns in numbers, and while loading future Daily Creates I noticed today’s date is (for US formats Month/Day/Year is 4/8/16 -get it? month x 2 = day and day x 2 = year, and all are multiples of four.

These are one of those challenges that have a lot of latitude. You can snap a photo of the number or of four items. I like to let the challenge simmer in my mind and wait for a later time in the day when some association pops up.

Mine was the Four Corners Monument, where Arizona, New Mexico, Colorado, and Utah share a common point. It’s out there in the vast open scorched nothingness beauty of Navajoland.

I went to the first time I went there; I took my Dad when he came out for a visit in 1996 (I was in graduate school at ASU). I have a photo of him… 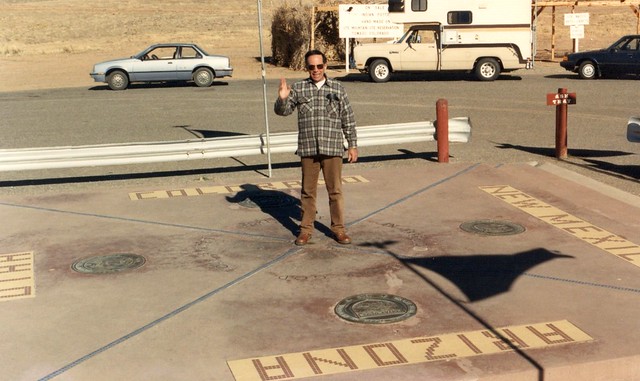 But I also remember when he took my photo, I laid down like a corpse. That photo is not on flickr, but I have a low quality copy on my computer. 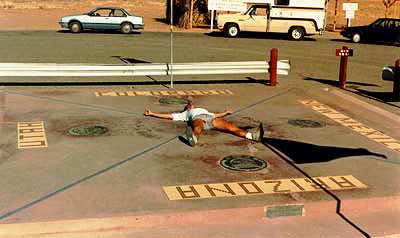 But I then thought of relating it to the Navaho culture’s Four Sacred Mountains; i know San Francisco Peaks in Flagstaff is one, and Mount Taylor in New Mexico another, and… I forget the other two. While looking for an image to represent the four mountains (Google Images, settings for licensed for reuse images), I found something better, from the Navajo People and Culture site a summary of The Navajo Four Sacred Colors: 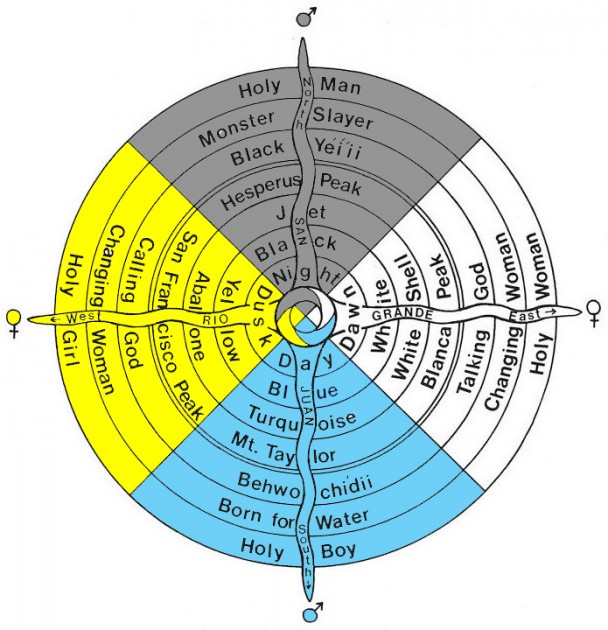 I took that image and overlaid it on mine, and distorted it to line up with the four lines of the monument. 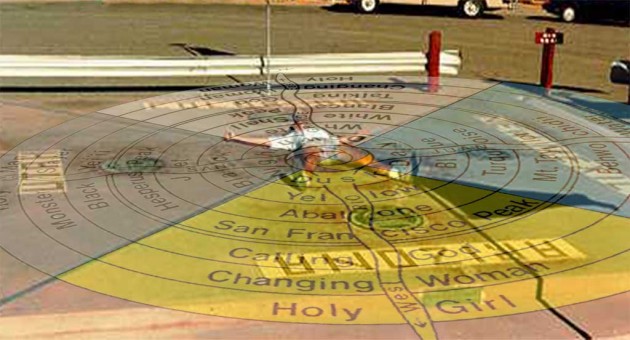 My image of four-ness for today’s Daily Create

The four is more than mountain and corners…

Color has many symbolic meanings in Navajo culture; in fact, a single color can mean several different things depending on the context in which it is used. Four colors in particular black, white, blue, and yellow have important connections to Navajo cultural and spiritual beliefs. These colors represent the four cardinal directions.

The Navajos define their homeland as the area between four sacred mountains in each direction, so each color represents a sacred mountain as well. Thus, among their myriad other meanings, the colors black, white, blue, and yellow link the Navajos to their ancestral homeland and the story of its creation.

I remember using the four corners as a metaphor for the center I worked in at a 1995 presentation for the League For Innovation: 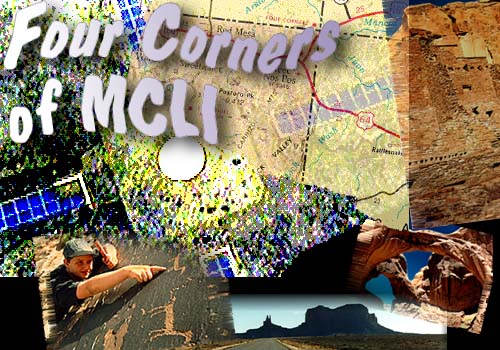 I made sometime around 1994-1996 a web site for my photos of the region, I called it More Than Four Corners (once again, because it’s on my domain, it’s still available). 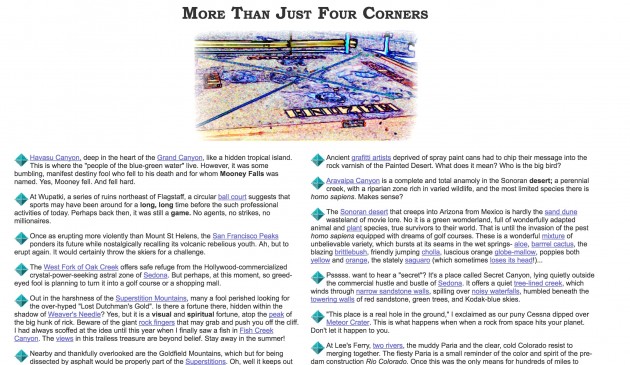 I must have redesigned that page; the last modification date on the HTML file is 2004, and I had added a Creative Commons license to my images, which, as I have been annoying people with in Instagram, YOU CANNOT DO IN INSTAGRAM. 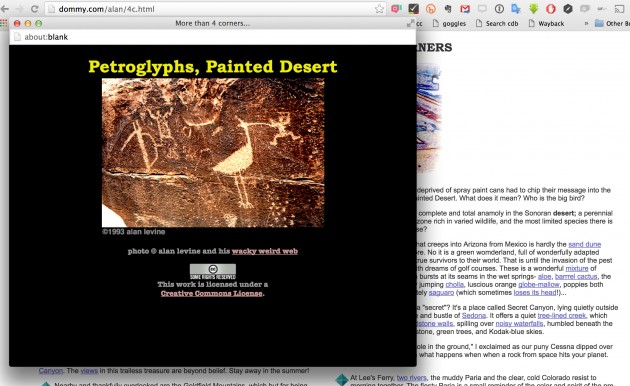 Anyhow, it was all fours, and that this photo was taken in 1994, 20 years ago (or 4 x 5 years ago) featuring a photo of me at Four Corners and connected with the Navajo Four Colors/Directions/Mountains… well it’s all… fourtuitous

Feature / Top Image Credit: I made this image sometime in the mid 1990s combining a closeup photo I took of the Four Corners monument and a bit of map of the fours states that meet there. It was for an early web site More Than Four Corners I made for my photos of the region