Long ago, long before the web, as a Geology student, I was on a trip to Los Angeles. On the return drive along I-10 I saw this billboard that read:

Barry’s Bail Bonds: We’ll get You Out… Even if it Takes Us 20 Years!

Why does this memory stay in my little brain some 30 years later?

I searched for images of a billboard in LA, and struck luck with this one from a Hyperbeast post about one of Ron English’s Obama Inauguration Billboards: 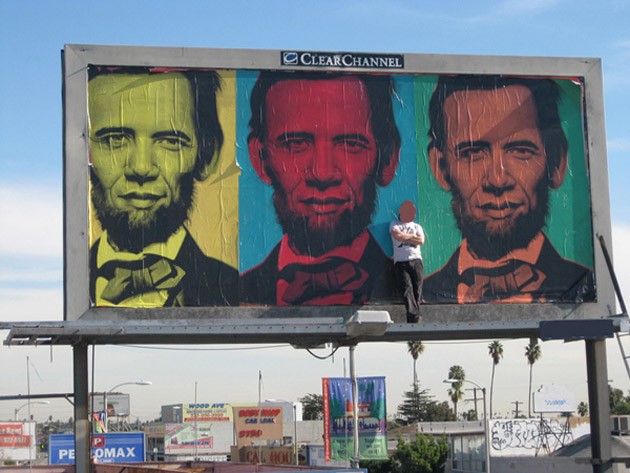 Perfect! It had LA, and a headless figure in front.

To give the billboard a texture, I put in an upper layer the first wrinkle textures from Valley’s in the Vinyl 18 Assorted Fabric and Clothing Textures, dropping the layer opacity to about 45%.

For my head I used a creative commons licensed photo of me at the OpenVA 2103 conference shared by Bill Smith (flipping horizontally).

This is one of those ones that really emerged based on the found images and messing around with it- I did not have this in mind when I started. I hoped to find Barry’s Bail Bonds in LA, but came up empty (looks like he set up shop elsewhere, or its not him), so here is a bit of the world I used that does not exist on the internet but is in my memory.