On December 19, 2006 I blogged about putting a CC-BY license on my flickr photos. Then on September 7, 2010, I had reason to try on CC-BY-NC. From feedback, I flipped to CC-BY-SA and a week later I was back to CC-BY, with these fatal words:

And this is the LAST time I will switch my flickr license.

I casually looked at a link Brett Gaylor tweeted:

We deserve better than a stock photo world. Be a #CCZero hero & add your images to the public domain at https://t.co/sWIhxTrZZk #makerparty

The Mozilla Maker party suggested uploading something to flickr with a CC0 license. Well, why not? I decided contribute to this by changing the license on an album I keep in flickr of my favorite photos.

But then I am thinking… why not put all my photos in the public domain? Why not do the most friction free license? The main difference, as I can see is that I am not licensing with an expectation of attribution. Frankly, even with a CC-BY license, often people do not attribute (those catfishers using my photos for their fake profiles NEVER give me credit).

To me, the way we explain, teach about public domain aka CC0 is technically correct but sets the bar very low.

Usually when people explain Public Domain / CC0 is like:

You can re-use it without having to give attribution. 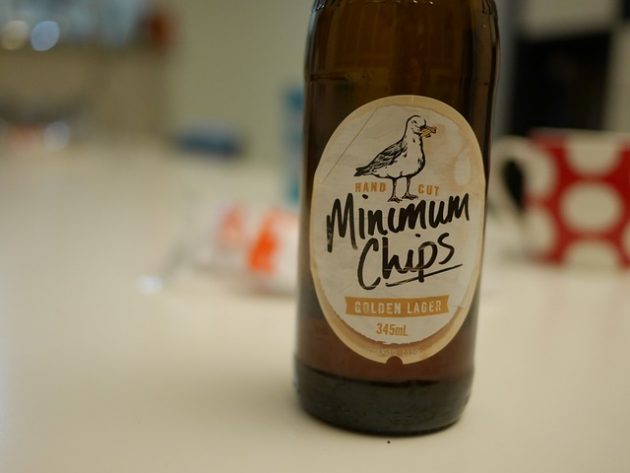 This is minimum compliance. And is compliance the spirit of a commons of sharing? Is that the best we can do? Comply? Aiming for a “C” grade. Average. Meet the minimum. Congrats on that. Go for mediocrity. Yay.

I gave up in trying to be an attribution cop.

So when we do this in practice, when we comply and skip giving attribution for media reused, what does this signal to our readers? What are they learning about sharing, by seeing great pictures in your blog posts, presentations, learning materials that give no credit?

They are learning, that like the common folklore goes, any media you can find in a Google search is free to grab and use. They are not learning about the circle of gratitude to flow back to someone who shared their work.

My strategy is do more than just comply. I try to attribute everything, even if I do not have to. I use many images from Pixabay which are all licensed CC0. And I give credit.

When I use my own images, I don’t have to get permission, right? Well I still attribute my own media. Boy am I silly. 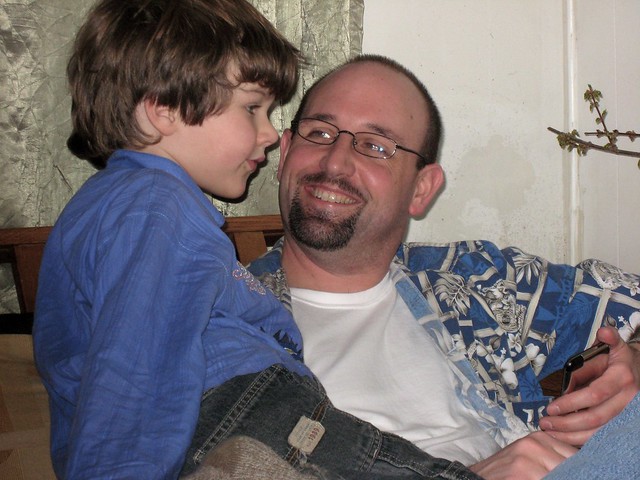 Because being part of sharing commons is not about following rules; it is setting an example for others.

You are also cutting people off from access to “more”. Let’s say I love an image you used, I like the style. What if I want to see more from the same artist, photographer? Without a credit / link, your image looks nice, but is a dead pathway on the web.

Then there is this idea of value of digital content.

flickr photo shared by 10ch under a Creative Commons ( BY ) license

I’m talking about this other myth people carry around:

SOMEONE WILL STEAL MY STUFF AND MAKE A MILLION DOLLARS OFF OF IT.

How can I make a living if I give everything away?

I know someone will send me an example of how something of theirs was re-used by an evil greedy company of profit. But statistically?

I don’t advocate giving everything you own / do away. First of all, it would take a lot of work ;-) But the idea of something than can be copied infinitely as having economic value is a bit of a contradiction. So I have shared 50,000 photos in flickr, because (a) it’s easy to do and (b) I have no interest or even idea how I can make money from them. I do not take/share photographs to make money from the photos; I do it because I love photography.

So if someone can make a boat load of money from any of my photos, I encourage them to do so. I congratulate them. I cannot consider it stealing or a loss if I never intend / desire to make money from my photos.

I also give away my computer code here and methods of programming. I get hired to provide them as a service, despite the fact people can use my stuff for free. You make a living from providing services, consulting, ideas, not from digital stuff. If I was a pro photographer, I would hope to make money from the service, not the products. I would get more clients if they can find examples of my work in the world.

I know people will not agree. That’s good. I like to be told I am wrong. It helps me learn (hence all the previous flip flops in my flickr licensing) I do not expect people to follow my way.

Okay, so I went to my flickr settings today, and set my license on all future photos to be CC0 licensed. I’m gone ZERO. They do have a feature to re-license all existing photos. I tried that: 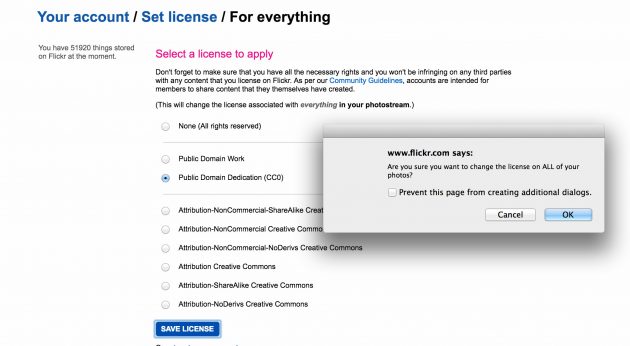 I asked for help…

Please help Obi-Wan-Flickr @FlickrHelp I want to batch change my license on 51k photos. I'm gonna need a bigger boat. Do you have one? pic.twitter.com/KfycHKZz6T

Doing this in batches is going to take a long time.

It can be hard to do a right thing.

But I never will stop trying ;-)

Alas, when you ask @FLickrHelp for Help, they just keep repeating:

.@cogdog Or go here and do it for every photo in the account https://t.co/5hPWptrlX1
:)

Go to Settings > Privacy & Permissions > Edit under What License Will Your Content Have > Batch Select A License > Select & Save :)

This link should take you there directly: https://t.co/EWXD1shmFy

Sometimes you have to be all caps blunt

You are not listening to me. I know where the setting is I have done it 3 times. IT TIMES OUT WITH AN ERROR EVERY TIME. pic.twitter.com/4nP9rPGv44

I think they got it…

Okie dokie. We can get that changed for you on the backend, but just to confirm that CC0 is what you want all photos changed to?

I better not change my mind again.

I thought flickr changed all my photos to CC0. Sadly, on reviewing my archive, it has not happened.

@FlickrHelp Second call for help. My photos have NOT been switched to CC0, making me a liar https://t.co/MpJfym2rbg Help? Please? https://t.co/30qKQrF4sU

Top / Featured Image: My photo of a bunch of zeroes. Because I am yet to get all my flickr photos flipped to CC0, I am doing them manually. This flickr photo by me https://flickr.com/photos/cogdog/4586183896 shared under a Creative Commons (CC0) license