Maybe it’s post US election / brexit hangover information / fake news fatigue. Or the end of the year wind down. Or something else.

But I sense changes into the online space I have inhabited the most for the last 9 years.

A chunk of the public discussion and banter I enjoy has maybe slipped into Slacks. Or maybe it’s all happening in Facebook, a place I no longer exist. And recently lot of colleagues are excited about a re-discovered conversations in Mastodon others are status-ing away at a space D’Arcy Norman spun out (see the valuable list of alt-spaces D’Arcy outlines).

It’s not that I am blind to the things happening on twitter that are turning people away; I take some notice, I filter through what others share, but I purposefully do no get myself sucked into the spiral of the cesspool. It’s there, I know what it smells like; that does not mean I don;t have to immerse myself in the poop pool.

For the most part, my twitter experience is still fun, rewarding. I don’t look at the full stream, I don’t go to the web interface, I don’t see promoted tweets, or the non-chronological sorting. Besides the tags I follow in my tweetdeck columns, my main view is through about 125 (Dunbar-25) accounts I scan through a list I called whimiscally “friendz”. I toss names in and out on an irregular basis.

Yet that view has been steadily growing less frequently updated.

It’s hard not to sense the waning of twitter. Not necessarily demise.

For some background, that was something I made in April 2007, in many ways a total homage to the kinds of diagrams Kathy Sierra was making at the time to explain tech. 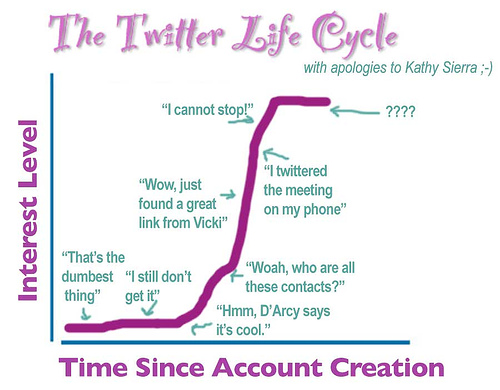 I posted the diagram on Wikispaces and asked people to edit to add their experiences. Surprisingly it has not been spammed in a while. Did I just stupidly write that?

As a testament to the way things worked, and a blogging tangent, my diagram did get an acknowledgement from Kathy, which meant I had a conversation point meeting her at the 2008 WordCamp we both spoke at, which meant upon learning at the speakers dinner how Matt Mullenweg got her as a speaker, I used the same approach to invite her to keynote at an NMC conference.

Twitter is not what it was then. And why should any community and its platform stay the same? Leave it to Brian to make the point clearly in reference to “the diagram”

I tend to think that much of the good and bad qualities we see that happen in a shared space are more a function of people that platform. I think back to what I experienced in my first sort of online communities– old fashioned listserv. There was abuse, and flame wars, and people were assholes, others got hurt.

But again, what we have seen is not the same. There are bots now, and data mining, and gaming algorithm. And doxing. So it’s the same and not the same. At the same time.

And there were earlier community spaces before I got online in the late 1980s. I was on the tail end and never did much with Usenet newsgroups and was later than the communities of Bulletin Board Systems (BBS) in the 1980s.

I got an idea to try and map my own evolution in these spaces. I was lookign not just at how much time I was in them; I thought of some totally fictitious Power of Social value (Ps) which is a function of:

Of course this is totally subjective. So I started by trying to sketch it out, with a timeline on the bottom. I tried to plot as well (axis on the right) a curve representing the proportion of time I spent online. And then I tried to draw curves for the spaces I have inhabited over time. 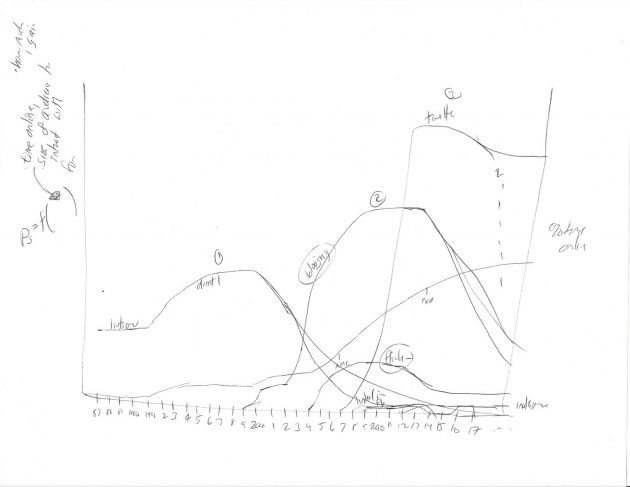 A draft of my online community spaces over time

Like most of my sketches, it is mostly illegible. To make a more presentable version, I thought if just replicating in Photoshop. But I decided to fudge it in a Google Docs Spreadsheet. The values I entered for numbers are totally made up, really meant to give a sense of relative importance.

It’s not scientific at all, and it only represents my experience. But here it is..

I put some labels on the bottom to indicate what work I was doing at the time. These are the things I charted:

If the magnitudes of my curves mean anything (and they don’t), it seems that with time, I am in multiple spaces, that they peak and fall earlier, but have gone to higher magnitudes.

The big question is– and the title of this post– is there a next one? What is it? When will I know?

Or is all of this hoo-hah.