Good swag? In the bag?

I’m just back from Toronto where I was part of an eCampus Ontario team doing workshops for a new project aimed at capacity building among institutions in Northern Ontario (I still insist geographically it’s central, but I will stop) (soon).

Ontario Extend is on the burner for it’s own post tomorrow. But as someone who usually loathes bringing “stuff” back home from meetings, I gotta hand it to the eCampus Ontario planners (a guy named Chris I understand?) for being thoughtful on the items participants were given in canvas bags on the first day: 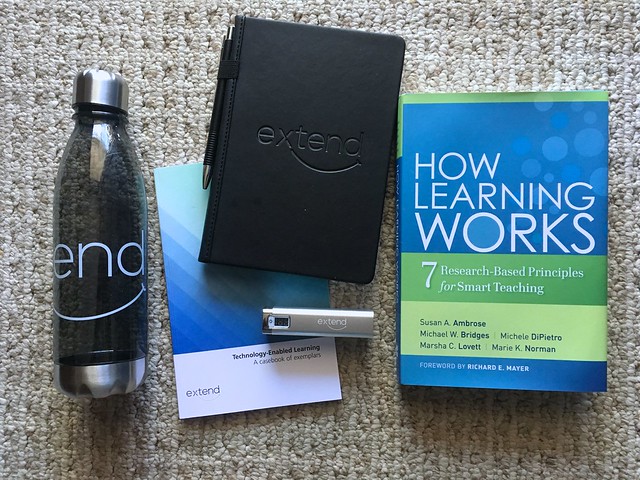 I’m keeping all the items. The bag too. This might be a first.

Ten years ago I was attending many more educational conferences, and tired of being handed an ugly bag emblazoned with some corporate sponsor logo containing maybe a pan, a cheap notebook pad with the same logo, and a print program. I started a flickr tag of said conference bags stuffed in trash cans: 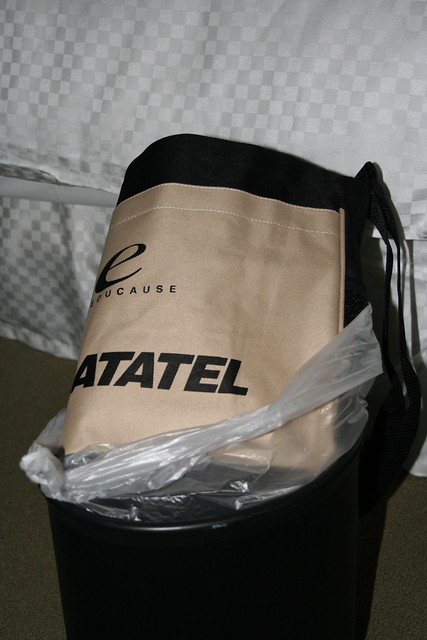 Yes, real mature, right? Okay, most were for the yucks, and I took the bags home and donated them to second hand stores. Now I tend to keep them stuffed in my truck for self-bagging at the grocery store. It’s rare that I actually want to use them.

One notable exception was the metal tool case one from the 1997 Macromedia conference: 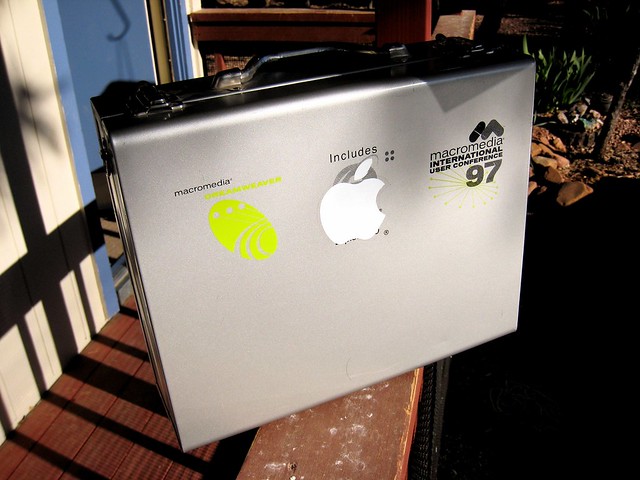 just because it was so different, and likely so impractical for people to fly home with. I have mine in a closet somewhere, inside is a scared copy of Macromedia Director 5.

There is one absolute exception to my conference swag is crap rule, and it’s this tote bag that I got at the 2003 MERLOT Conference in Vancouver (kudos to them for actually having the web site still alive, was not expecting that). 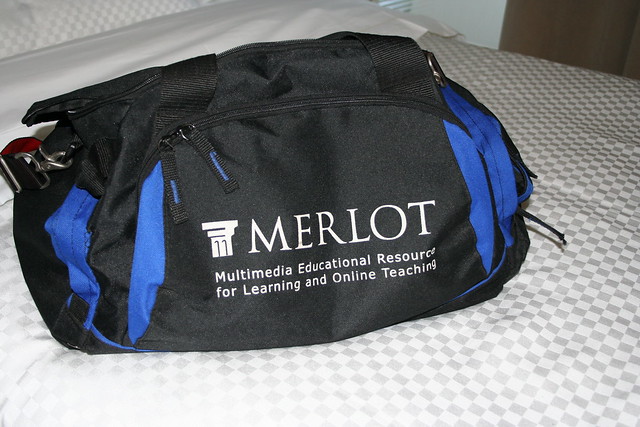 It looks rather fresh in that photo from 2006. I have used that as a travel bag on too many trips and weekend outings to name. I still use it, 14 years later. It’s frayed, and one of the side pockets is ripped, but oh has this bag been practical with it’s number of compartments and size.

The funny thing is my pal Pat Lockley re-tweeted someone asking about good conference swag:

Tech Twitter: Show me the best swag you've ever been given?

RT for reach? Would love to see what kinds of non-junk swag is out there!

I could not help but reply with my MERLOT bag

This travel bag from the 2003 MERLOT conference is best swag/bag ever. I still use it https://t.co/jbon9w44Kr

Someone else on the tweet canoe asked about the brand name.

What is the brand of the bag? I love to hear about promo gifts like this being used for years and years! #powerofpromo #ispyswag

I could not seem to find a manufacturer name or tag, but in looking this morning, more than 14 years after getting this bag, I found something I have never seen on it before. On the bottom was zipper. secret compartment? a false bottom where I might found thousand dollar bills?

Nothing that exciting, but what a weird sensation to find that this bag, that I have carted so many places, had a hidden set of backpack straps! 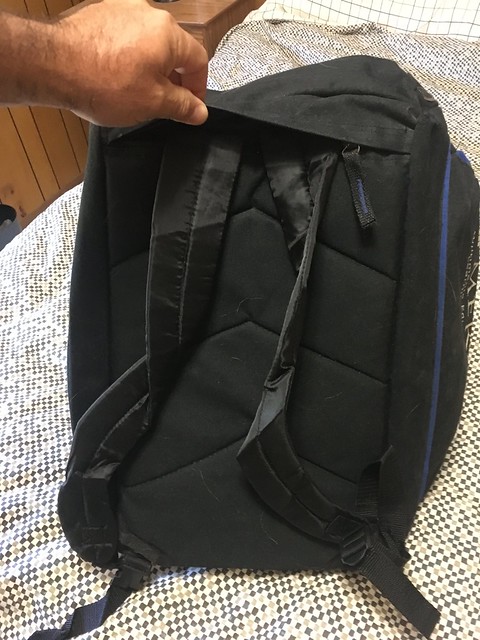 Perhaps there’s a metaphor lurking there. I can see it was quite a thrill to find a new feature in something I have owned and used so long I can barely remember not having it.

And if I get that kind of use from a conference bag over 14 years, then they are not all a bad idea. Just the ugly ones.

That was a conference bag from Vancouver, and the stuff I brought home yesterday was from an event in Toronto. Doth 2 data points make for a Canadian Correlation effect?

What’s in your conference bag?