That comes from family births/deaths/anniversaries I pulled from my Mom’s calendar after she passed away. “Y” means “yahrzeit” for the candles Jewish people light on the date marking a death.

I think Bobby was my Dad’s cousin, his mom Helen was my grandmother’s sister, what I know is a name and date he died. I can barely summon a memory of a bad man not dark clothes who did not say much.

What I recall is that Cousin Bobby worked for the Post Office, and used his vacation time to travel the world. I do know for sure we’d get picture postcards from places he went, with the sole message on the back: 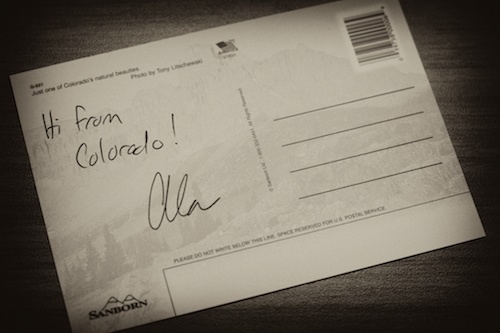 When I did my long travel trip in 2011, I decided in the spirit of the mystery relative I barely remembered, to send my Mom a postcard from every state & Canadian province I visited on that trip.

My blog post there did trigger a message from my sister, who was visiting Mom at the time:

You are correct that he worked for the post office. He was a cousin of dad’s as he was grandma’s sister Helen’s son. He did like to travel. He would come in on the train and mom would pick him up at the station. I do remember that he always wore a suit no matter what the season. He also never had any luggage, only a toothbrush! He would only stay for one night and be on his way.

The last postcard I mailed was from Ontario, somewhere east of Toronto, only hours before Mom suddenly left this world. I sent one more for her. When we cleaned out her house, all the post cards were posted on a bulletin board (or maybe piled on a table, I struggle to recall).

I could not find too much more info on lone, most searches lead to ancestry or newspaper services that require fee memberships. Knowing he died in 194 helped (after filtering out “Jack” in searches on ‘Klugman”) I got birth and death dates. From a site that pulls info from Social Security records, his was issued in New Jersey and almost useless facts like:

It’s not much of a memory or records left for my father’s traveling cousin. That’s a prospect with nothing left behind, a few scattered memories of an odd relative who traveled the world.

But here’s to you, Cousin Bobby, thanks for the shreds of memories. Better than nothing at all.