Gotta feed the animated GIF bacteria that lives in my gut. I had a few sets of photos I have taken over the travel span that I took series of things in motion for the express purpose of making them animated. I did these in PhotoShop via the method blogged earlier – essentially importing files as a stack, setting frame sequences in he animation palette, and sometimes masking out to reduce the elements being animated. These will be tagged to end up in the Photo it Like Peanut Butter ds106 assignment.

First up, from the great state of New York, at the small town where I crossed the Hudspn River, I had just hopped out of the truck to take a photo of the bridge when the sound of a train grabbed my attention (I literally ran across the tracks to get the angle) – this one is 549k.

Next up, an animation from a single image. I had stopped to take a picture of Yet Another Crumbling Down Home. I really liked the look of this window and its composition, but it also looked good in black and white (same image, just converted). In this one, I masked just the inside of the frame to isolate a color change, and made the time it spent on the black and white frame about twice as long (and it is only 111k):

I could not resist this, even though I really should have spent the last hour doing something productive. But I read Mike Caulfield’s post on True of EdTech As Well, where he latches on to a criticism of the TED technocratic approach to world problems, and this quote from a quote just cried out to […]

This has to stop, but not tonight. I missed the fun of the afternoon shit talking and gif smacking today. With some positive feedback on the last batch, I set out again to see what I could do with GIMP as a tool.

For these next two I went for very original material, stuff you cannot get on the internet- some of the videos from the Storybox as my intended purpose was to keep the raw material on the pirate box but allow remixes to float out on the open web.

This first one was a barbershop pole spotted maybe in British Columbia- I had some shaky hand held video, but found at least one short segment where there was little jarring for one spin:

BUt there was still jiggle. So I made a selection of just the moving pole part, and deleted everything else from 6 of the 7 frames. What I cannot figure in GIMP is how to make a deleted selection transparent; mine got filled with white. I solved the problem by making a copy of the lowest frame, which was a full image. I then used the same selection to fill the same area with white.

I then made a duplicate of this frame and moved it below each of my single frames, set the mode of the layer to “darken”, and merged each layer down. This I ended up with frames where all the movement was within that bit I had saved fro each layer.

This next one was form video I took in Central Park, New York. I heard form afar the loud banging of drums, and came across a protest of people at the boathouse who were protesting the management- their goal was to convince tourists not to go inside, and they were pretty darned successful I recorded some of the audio and spoke a little to the protestors, but I loved most the intensity of these drummers banging on plastic jugs and the metal rails of the barriers. The sound is just exported from the original video clip.

During my hike today to see Dark Hollow waterfall (in Shenandoah National Park), I did some more experiments with doing some rapid sequence shot of the water detail. It was cloudy, but ay ISO 200 I set the aperture open enough for fast shutter speeds 1/1250, 1/3200 to freeze the motion, and taking a rapid […]

I’ve been a month in Fredericksburg, living just around the corner from locations of major Civil War battles 150 years ago. On Friday, I took a stroll down Sunken Road, a place where the Confederate Forces held a commanding position on a hill, and some 15,000 Union soldiers died trying to charge it.

That’s war, what is it good for?

This wall, likely reconstructed (?) is part of the original wall that existed here, when ti was the major road to Richmond. 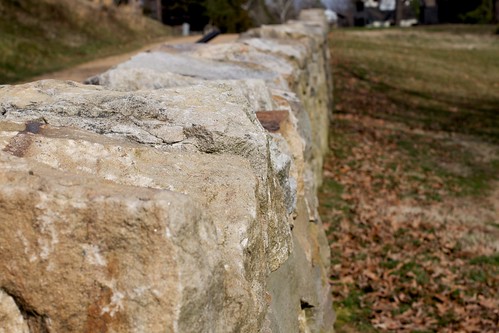 Tonight I came across a stunning set of 48 photos in The Atlantic, part of their series commemorating the 150th anniversary of the Civil War, in this piece, showing photos of the locations. What’s remarkable, is that the war coincided around the time when photography started to be viable, and this was the first war (I am guessing) documented so much in pictures that brought the news to the eyes.

What stood out is the sharpness of the detail, so much, especially in large format, how realistic the people looked. Of course they look realistic, they were there.

Photo number 28 stood out because it was taken along this same road I had walked Friday, Sunken Road, although I was looking down the wall towards where this photographer was standing: 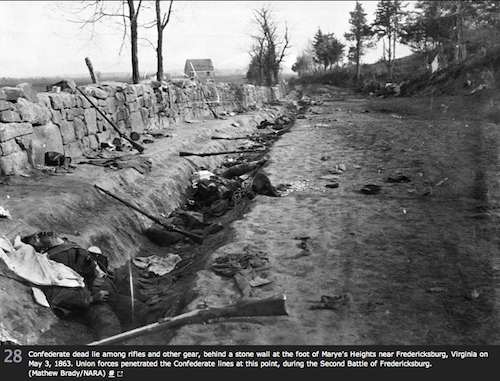 The caption from the Atlantic:

Confederate dead lie among rifles and other gear, behind a stone wall at the foot of Marye’s Heights near Fredericksburg, Virginia on May 3, 1863. Union forces penetrated the Confederate lines at this point, during the Second Battle of Fredericksburg. (Mathew Brady/NARA) #

This second battle is not the one I read about on the signs along the road. Apparently a year after the 1862 battle where the Union got slaughtered here, the Confederate troops went west on other campaigns, leaving a thinner number of troops along this road.

(I am on thin ground of knowledge here, I am not a historian, just picking up pieces along the way).

So what to do with this bit of synchronicity?

I wanted to see what could do to blend these, even though they are from completely different positions along the road.

What I did ended up a large file (about 2 Mb), so I am placing it below the fold.

Day four of the Fort Myers (FL) to Strawberry (AZ) CogDog Express. It’s been drive, drive, drive. Today was the stretch of Texas from Dallas to Amarillo, and the dry southwest land I know and feel just slowly, every slowly merged – the big sky, the sparse plants, the space- big wide space. With a […]

The animated GIF still motivates me. I made two more today from photos that just cried out “GIF me! GIF me!). This first represents the loneliness of the road, it just goes on and on and on and on… I’d notice a large number of these log trucks heading north on US 19, and spotted […]

Flags make for great animated GIFs- I spotted this set of flags in Cookesville Tennessee, a US flag at half mast and a MIA flag. The first one is only 2 frames, the second 4. I was not even planning to GIF these, but the camera was in the mode of rapid fire shooting. And […]

While in Nashville, I noticed these interesting series of reflections from the Cumberland River in an office building, literally twinkling in the windows. I wondered if I could take a series of these to create an animated GIF. I used the camera in multiple shot mode, but still felt like the camera moved slightly (it […]

This was purely an academic exercuse (that typo is intentional) in learning how to import video into Photoshop and use animation and masks to create animated GIFs. I just used a random video I had laying around in the Storybox… First turn on the music… dance music Get up out of your chair and dance […]