It’s been on my to do list since August, but I finally got the last mile of code done to restore my Five Card Flickr stories site to life. 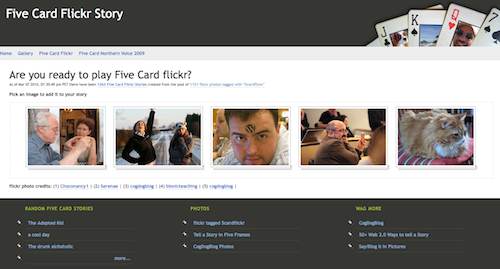 If you had not played with this before, the initial description tells it all:

I’ve been ultra interested in the idea of telling stories in pictures. Ever since I saw Ruben Puentadora‘s workshop on web comics back in 2007 (and later at the 2008 NMC Summer Conference) a little idea has been brewing. Ruben does this fantastic group activity based on work from Scott McCloud, that makes creative work, from all things, of old Nancy cartoons. Using the Five-Card Nancy web version of Scott’s original card game, Ruben conducts an exercise in visual story weaving.

Basically, you get a shuffled deck of five panels from different Nancy cartoons, and you have to pick one at a time to, in five steps, produce a coherent story, or at least die laughing trying. The point is to make connections and discuss the reasons for the choice.

The idea that has been brewing is to create a web tool that works the same, but rather than drawing from a pool of Nancy cartoons (no offense to the Nancy-holics), draw from a pool of images, say in flickr”“ this is different slightly from the Flickr Tell a Story in 5 Frames, but presents another way of facing the challenge of telling a story in images only.

The problem with that version was the part of it that fetched flickr images with a given tag was built on some code that a tweet out got a solution from John Krutsch. While this worked, the logic was based on parsing the results display of a flickr search, and when flickr changed the output of their search last August, my code went up in a puff of smoke.

I knew that what I needed to do was to do it the right way, via the flickr API. Fortunately, I had some experience and used before the phpFlickr code library, and a few months ago I got a portion of the code redone, but left it on the shelf too long.

One task was to redesign the database a little more compact fashion and to do away with so much dependence on writable text files to store data (I was trying to be nice to the flickr API and store a local array of found photos). I also wanted to try and preserve all the bits that had been created before, so I had a few rounds of running some custom code to move and update the database.

So now the story creation parts al work again, and any photos you tag as 5cardflickr should be added to the pool (note that I poll flickr only once an hour to look for new photos).

I’d like to test it a bit before updating the google code site, but when I get the code, there, it should be easier to set up than before.

Try it now, tell a in 5 flickr photo…. http://web.nmc.org/5cardstory/play.php