It all started with a tweet from someone I don’t know. Today’s DS106 Daily Create was about showing how “massive” it is:

And I smiled seeing how @g1000p, a twitter account with 4 total tweets, responded in a fun way, calling for me to respond:

How massive is @ds106dc? From South Africa to Arizona @cogdog (hi!) And TAG, you're it! #ds106 #dailycreate #improv pic.twitter.com/ihYFQMWBYj

I have no idea who @g1000p is but will assume they are from South Africa as tweeted:

How could I not reply? This is DS106, after all. I decided you use one of my own photos, onto which I superimposed the Arizona state flag

I’ll add some notes below on my own technique… but the call and response via twitter is another fun aspect of DS106, one that originates from its participants, not its designers or teachers. It’s kind of like a ro– well something.

Mariana quickly got her Union Jack on

And someone else from South Africa….

And Jaap wraps his hand in Holland

Made a better one (with Bazaart): pic.twitter.com/I1IWcWdORO

So what? A bunch of people in twitter posted pictures of flags pasted into hands. But this has been to me, the magical sauce of DS106 back to December 2010, when people were making digital art, riffing off of each other, before the first open DS106 even started. Not as part of any assignment, but purely out of being interested in playing off of other people’s creations.

Who does that? Hello, Udacity/Coursera?

It’s not unique to DS106- this spontaneous creative riffing goes in in CLMOOC, in #rhizoXX, and goes back farther in history to the 1990s web forums as Photoshop Tennis.

This little bit of play is not MASSIVE, it will not disrupt or fix anything. It just is open expression, without any really any purpose besides doing something in parallel with people who are far away (geographically speaking).

Look for this to be a future DS106 Daily Create. I will likely cast it the way I did it, use a photo of your own hand, not something you sponge off of google. This is how I did mine in Photoshop, but the steps can be done in almost any graphics program.

The base image is my own photo 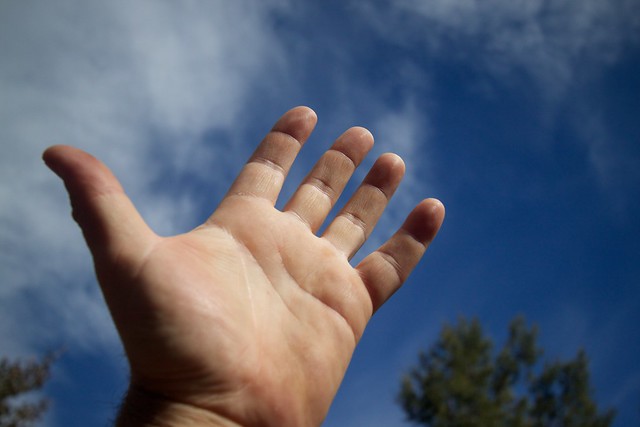 Which to me works because it is taken in my home location. That’s the first part. Here are my PhotoShop steps (trying to reproduce in hindsight). In Photoshop I use the magnetic lasso selector to select the hand. Using the magnetic lasso tool to make a selection

This lasso is good at marking the selection when the colors have high contrast, as you drag around, it is pretty good at sticking to the margin. Where colors are not distinct, or in narrow reaches, I add clicks to anchor the selection.

Unlike other selection tools, as we will see it need not be perfect.

Then I find an image of the Arizona Flag from 50states.com, and Copy.

Returning to PhotoShop, I go to Edit -> Edit Special -> Paste Into. Use the special paste, it is yummy.

This is powerful, it creates a “mask” so that the flag is visible only within the area I had selected:

The power of masks

You will notice that there are some sloppy areas at the bottom, and maybe some of the fringe areas. This is why masks are really powerful (have I written that already like 10 times?). When you make a selection and delete what is not wanted, it is a destructive action, the original is not the same.

When you edit your work with masks, it is non-destructive. This means you can refine, and modify the selection without screwing up the original image.

Okay, enough talk, what do we do? Well, you click that little black and white mask icon, and you start editing the mask. You can use selections, paint brush (that’s what I do), and you refine the selection by these simple rules. Black hides things, white lets it show through. It is a mask because it is like holding a cardboard cutout with a light shining through it.

Here, I have zoomed in and painted the mask in a bit more to clean the edges: Okay, I have good edges, but the flag is a bit rigid and horizontal- I want to make it look a bit more melded to my hand. Now here is a trick about masks- when you see a lock symbol between the two, any transformations (resize, rotation) applies to both the image and the mask. Sometimes this is what we want to do. But in this case, we want the mask to stay on the hand, and change the image, so I make sure the lock is off (click between the image and the mask icons in the layers palette to toggle the lock).

So now I want to rotate the flag, and maybe use distortion or skew to tilt the map (make sure you click the image preview icon in the ayer palette so you are editing the image, no the mask): And maybe this is enough, a hand that is in the shape of the flag. But I want to may it look more like a flag color hand. Easy enough, I lower the layer opacity enough of the flag layer to see some of the lines and shadows show through:

You might have to toy with the amount to make it look like the hand has the flags color.

If I see some irregularities with my mask selection, I can go in and any time, and modify the mask.

And that is how I do flag hands– but really, getting a handle on layer masks have elevated my Photoshop game by orders of magnitude, even to deal with some of those selection edges that come in a bit jaggy (can you think of how to smooth them out with a particular kind of brush?)

Waving back to DS106 from the state of Arizona, where the state sating it is the land of 5 “C”s that made it valuable – without looking it up, can you name them? One is “Copper”..