Nothing has been more essential and affirming and still fueling my every day work than being part of DS106. I’ve not taught a class since 2014 yet I still spend time queueing up Daily Creates and even yesterday cooking up a web form to collect new art for the web site.

Since 2011, xMOOCs have peaked and waned, wacky politicians have come and come, yet DS106 still motors along (now that is a “fine tuned machine”!) with no single person at the wheel.

Learning to wrestle with the Feed WordPress syndication method led to many projects and creating a somewhat guide to DIY (it’s more than clicking a button). It led to making the generalized versions of the daily create and one for the assignment bank that I have used on several projects since, and shaped the course site for Networked Narratives.

But more than that, it occurred to me this week that it’s also part a way of thinking about the way I “do” the web. Do you remember the idea of (or maybe you read about it in some retro Buzzfeed piece someone forwarded) the “read / write web“. In many ways what we see in 2017 is a lot of a “skim / forward” web, where rather than building the web, many people just forward / like/ retweet / reblog what they see.

In a way it reminds me of my Dad coming home from his office work in the 1970s with some cartoon or one page joke that people in his office shared copies from a copier machine.

What DS106ing has taught me is to see almost everything that flies by as potential raw material to change up, remix, augment, build upon. For example I spend time checking the Creative Commons Slack channels (anyone can join). In a side channel related to people who love pets and animals, someone shared this great series of images from Boredpanda 10+ Animals That Look Like They’re About To Drop The Hottest Albums Of The Year.

It’s great stuff, funny, most people would share it in Facebook, twitter, slack channels, and then go on to the next piece of candy. I’m not immune, I shared too, though I framed it in context for someone who adores images of pigeons

Suggestion for @audreywatters "Greatest Hits" collection– They look like they are posing for a 90s rap album cover https://t.co/HR7JkKzezI

actually I did not forward the Boredpanda piece, which accumulated various images into one listicle- I shared the source of the image.

But along by DS106 juices were flowing knowing this could be a good idea for a Daily Create- thus TDC 1880: 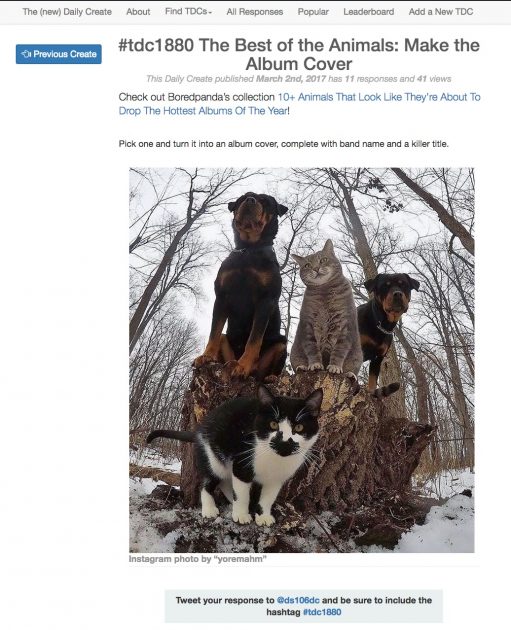 The idea of a Daily Create, to me is, that you create something. You don’t just forward something. The “add” to the funny pictures is “Pick one and turn it into an album cover, complete with band name and a killer title.”

Hence, mine (I found and downloaded an ACDC-like font)

Now here is where I trip on my own words… When I talk about DS106 and especially the Daily Create, I say it’s not important to follow the instructions, if you can make something interesting “break the rules” “no one is judging you”.

But to me, if the task is making an album cover, there are a few aesthetics it needs to represent that thing– a square shape, and big bold text with the name of the band and the album title. Going beyond would be little ribbons like “Featuring the hit song…” or the small text with the record company name. It’s called “Album Art” for a reason.

These responses show it

If you really want to see the DS106, see Paul Bond’s example that is also blogged with the “behind the scenes” making of explanation.

Some people used different pictures, that’s fine. It’s about making it look like an album cover.

Others just tweeted pictures of animals. And others obviously are just learning to edit graphics, so the text on the picture may be hard to read. All on a spectrum. And whatever people choose to do is fine. But still– it’s called the Daily Create not the Daily Google and Retweet.

Doing a “Create” is not googling for a picture and just resharing it.

This way of thinking happened when I was thinking about writing this post. I always start my writing with looking for my featured image. In a search on “create” I found a nice image with the letters of the word on a Scrabble rack. I wondered of there was a web site that generated this kind of images, but all I found were Scrabble cheat sites (there are a lot).

Then it struck me, why not make my own? I have the old Scrabble board game I learned to play with as a kid. I did a setup shot in front of my laptop. On the rack was actually “C [blank] D S I O P” because you only get letters, not numbers.

After grabbing a photo with my iPhone, I took it into Photoshop, painted a little nub to make the “I” a “1”. The “6” was harder, flipping the “P” was ugly, so I just clone brushed out the letter, and super-imposed a Helvetica font “6”, added a little emboss, and called it done. That was about 20 minutes. 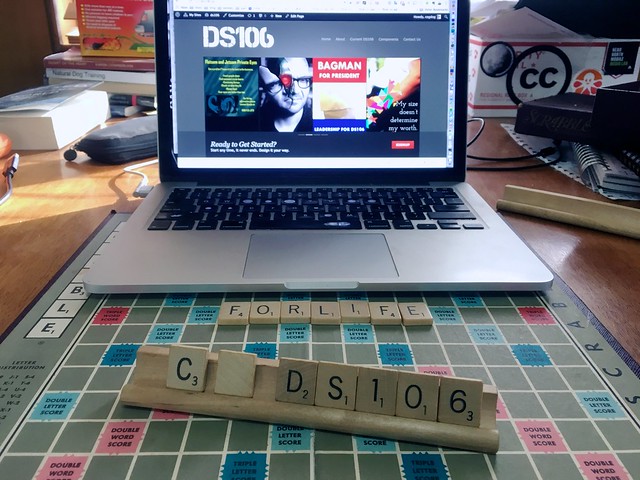 The DS106 mindset to me is not being limited to what the web provides, not just shoveling the same content other people are doing. It’s all about putting the “Create” into it.