Twitter recently enabled features to add descriptions to uploaded images, a huge boon for accessibility. That’s a feature, how do you make it a habit?

Well, by doing it. I’ve been trying most of the time.

Alt text provides additional information to the HTML created when images are embedded in web pages. The primary purpose is for increasing accessibility for visually impaired people traveling the web; screen reader software will use it to describe images they cannot see.

I just played a bit with the Mac OSX Voiceover utility to read just 2 of my tweets. Enjoy the experience:

Twitter did add options for alt description tags in tweeted images, but it hardly got use or attention until a widely shared tweet from @_Red_Long

I’m a blind twitter user. There are a lot of us out there. Increase your ability to reach us and help us interact with your pictures, it’s really simple and makes a huge difference to our twitter experiance allowing us to see your images our way. Thanks for the description ? pic.twitter.com/hCsjoFdmev

Still, to do this you actually have to turn on a featured buried in your twitter settings; one might wonder why it’s not a default to be on?

In fact I wonder if twitter knows how few people have bothered to enable the setting.

I’ve been using it the last 2 months within the Echofon app on my iphone trying to be consistent, though I am far from getting it done 100% of the time. Maybe 85%? It is a problem because most of my tweeting is done in Tweetdeck and I do not see this feature enabled.

In Echofon there’s an editable field over the image, so it’s really not much effort to do: 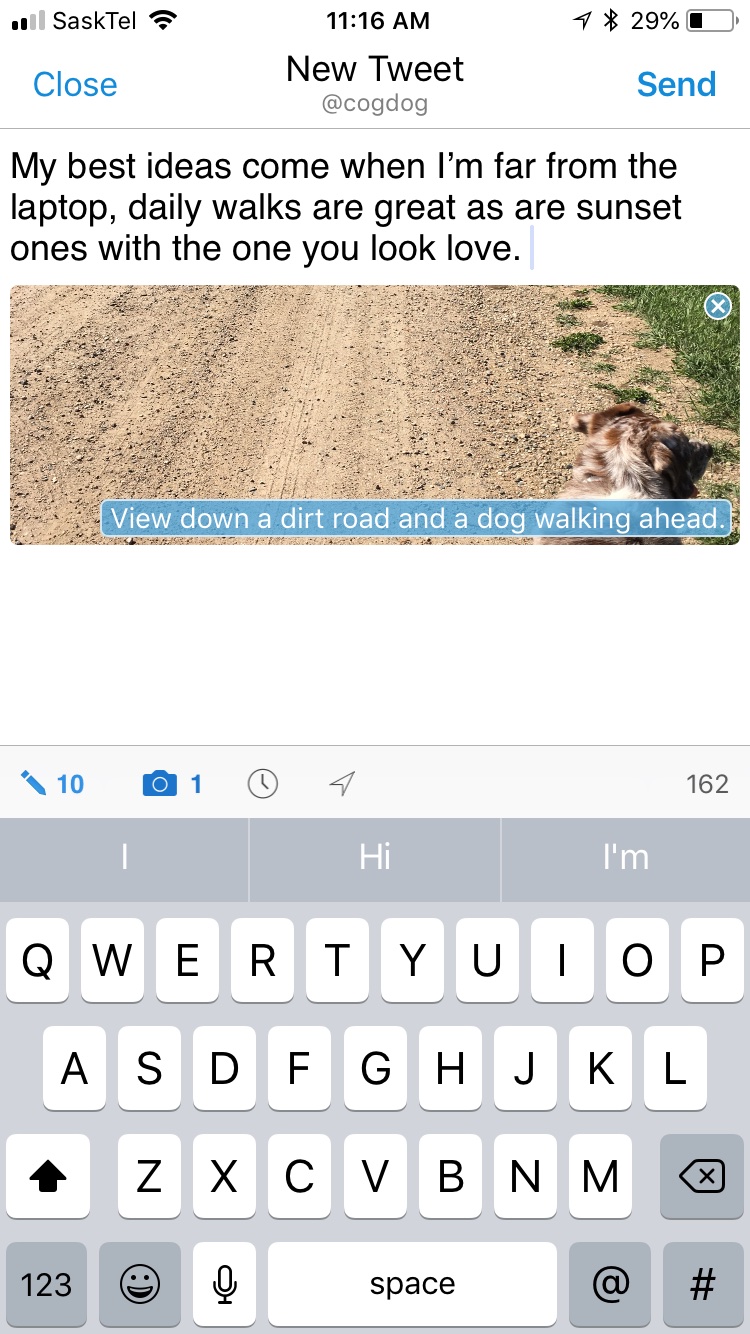 I don’t see anything in the browser (because I can see the photo), but there in the HTML I confirm the alt text is present:

And in using the web interface, likewise, after uploading an image, I get an Add Description editable field. 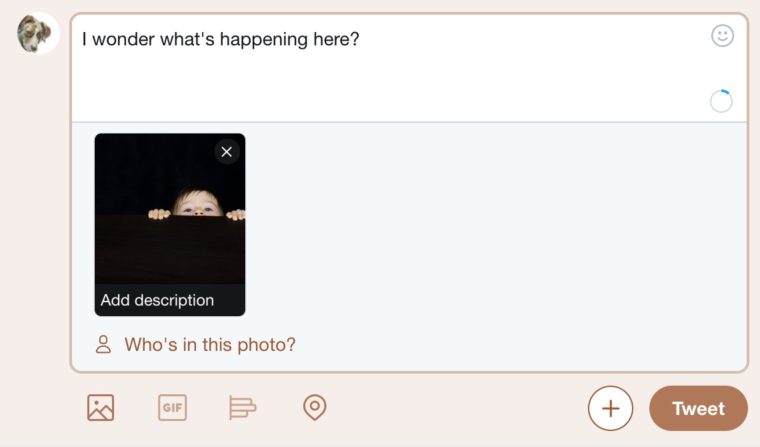 Adding an image description in the twitter web interface

That’s the functional part of this — this is a buried option. Accessibility is 15th in a list of twitter settings. Last. Dead last. 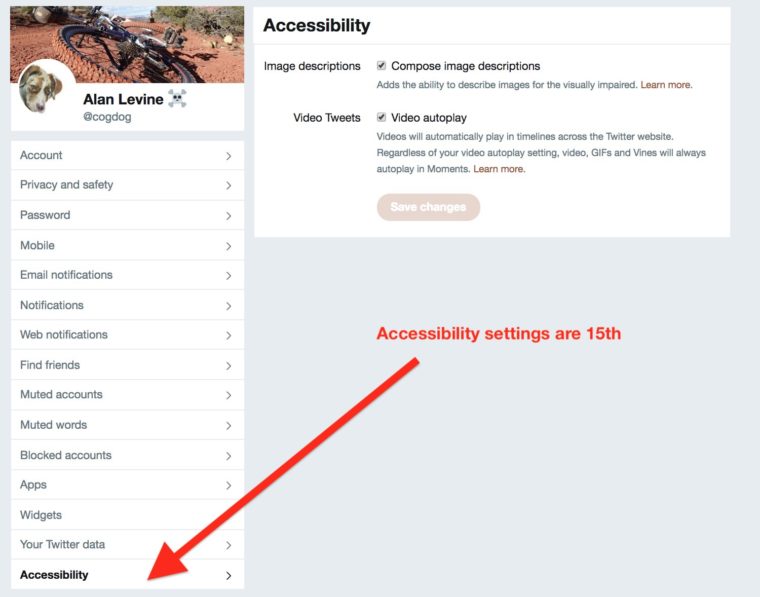 Does the order of settings indicate something about twitter’s stance on accessibility?

Although Twitter’s support page is titled How to make images accessible for people all it tells you is how to turn the feature on. When the feature was announced in 2016, the marketing people honed this vacuous statement

We’re excited to empower our customers and publishers to make images on Twitter accessible to the widest possible audience, so everyone can be included in the conversation and experience the biggest moments together.

So excited that the accessibility setting is 15th in the list? That it is not enabled by default? That hardly sounds like “including everyone in the conversation”.

But more than that, there is the craft of writing this. And this is something I have been trying to hone. What is the most important things to get into an image description so someone who cannot see the image can read enough to understand?

I found a bit more help from Webaim on ALternative Text, with mention of considering the image as content vs function, it’s context, with many examples discussing the ways one might write image descriptions.

Pretty much elsewhere you find helpful suggestions like “Describe the image as specifically as possible”. Gee I never would have thought of that. And it should not start with or include “image of” or “picture of”. Or that it should be “meaningful”.

It is worth noting that the description should be both complete but also as short as possible.

The more links I read on googling “How to Write Good Alt Text” the more dismayed I got in how the bulk of the results were about the mechanics of doing it.

I’m sure there are some better guides out there.

But my approach is just to keep trying my own ways to write image descriptions and aim to get better just by the act of doing.

Frankly, this exercise underscored how accessibility is really a 15th item priority for most people. Maybe you can uprank it yourself. 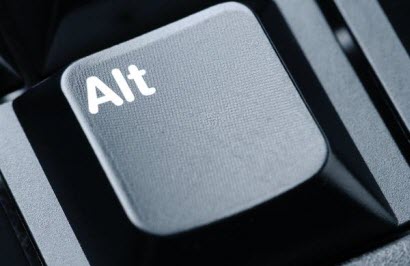