It just takes repetition for new habits to become ingrained ones. That seems logical, but heck, in 2018, logic is not what it used to be (let’s save this tangent for an offline rant).

For this week’s (actually it is last weeks I think) 9x9x25 I am sharing my own effort to be as diligent as I can in including alt descriptions in my online use of images. There’s part of it that is just the right thing to do, something that really does not expend much effort. But I will also clue you in that it gives some pause and some thought to what you are conveying in an image.

I got a bit fueled up for this in June as I learned about a lot of PR made about twitter including the ability to add alt descriptions to text, that would make twitter content more clear to people with impaired vision).

Still twitter does not make it easy. As a user of twitter you need to opt in among a series of almost hidden settings to turn on the functionality to edit image descriptions. This alone, I bet, by not making accessibility features on the default, means that 99% of twitter users will never even be able to do it.

I think a lot people should jump in twitter to change this. Heck I spoke up in January

Do this. Now. Cannot imagine why twitter would not make accessibility option on the default. https://t.co/KFKkgq7hDX

But why would they listen to me.

So I have been doing my best to add descriptions to tweeted images, on my mobile device, and when using tweetdeck on the laptop. I’ve also been taking care to add them when uploading images to blog posts.

It’s not about describing the image in inordinate details, but as I understand, what it takes to replace the content in an image with suitable, brief text.

As I have done this, I sometimes find it’s okay to leave a blank alt="" tag if my writing already explains something, e.g. if it’s not essential to understanding to replace the image, just filling with repetitive task must me a huge annoyance to anyone accessing the web view a screen reader.

And FYI, I am no expert on doing this “right” I am figuring out as I go. A lot of my posts are screenshots of tech screens, that have a lot of detail. Looking at the one just published, I don’t see a need to use alt=”” text when there is a caption:

Or for this image of a admin screen:

It’s hard to know how well I am describing these.

WebAim provides instructions for OS X users to turn on Voiceover features where you can experience the web as someone w/o good eyesight (I assume there are ways for people with other OSes to find a way, that’s your googling to do). I challenge you to learn the commands (all keyboard) and try it for an hour. Or five minutes.

I struggled much to get the hang, well it took maybe 45 minutes, but I still flailed at getting the cursor to move to next elements.

Just for fun, I went through my own tweets, and here are two in a row that include image descriptions I entered in Tweetdeck.

First listen to the recording of tweets being read:

Then see if they conveyed what was in them.

A week after I heard about it all over social media, @flickr finally tells me, because they "are required to" a fee paying flickr Pro member, that terms are changing.

Flickr I am trying to love you but you are treating your best customers as communication afterthoughts. pic.twitter.com/9sCFyrSZbV

But here are things I am missing doing. When my blog tweets a new blog post, the image it is using (via open graph tags) are not coming through with alt descriptions. I guess it’s okay as they are not strictly necessary?

But I notice that for images I uploaded as a featured image, I have not been adding the alt text (BAD COGDOG). So I have done it with the image on this one as a test to see of the alt text goes with it.

Yet, thinking about the replacement of information, I am unsure if featured images that show up as twitter card images really need replacement. Thoughts?

I generally insert my featured images, with full credit, and alt descriptions if needed, at the bottom of my posts.

And as I have found, others too, that even with twitter’s added functionality, they do not apply to animated GIFS. So no reaction gifs for the visually impaired.

It’s unbelievable challenging to navigate the web by voice reader only. Maybe it’s worth doing a challenge to put on opaque glasses and try it for an extended period of time. Maybe if the powers that be did it in twitter, they might make image descriptions a featured just turned on. I challenge them to explain to anyone, why it is not.

Here are two tweets for you to figure out. IN audio only (and darn it took me another 15 minutes to fumble the navigation in Voiceover!)

There are the links if really curious.

The featured image for this post has alt text defined:

A youngish teen boy watches in the mirror as he shaves for the first time.

But this is not sent out with the tweet by the JetPack Plugin’s Open Graph feature. The Open Graph spec has a tag for og:image:alt:

A description of what is in the image (not a caption). If the page specifies an og:image it should specify og:image:alt.

But this is not being provided by JetPack, here are the Open Graph tags for this post

I’m submitting a message to the Jetpack support forums. Wish me luck.

Featured Image: I have used this one before, but I love it too much… 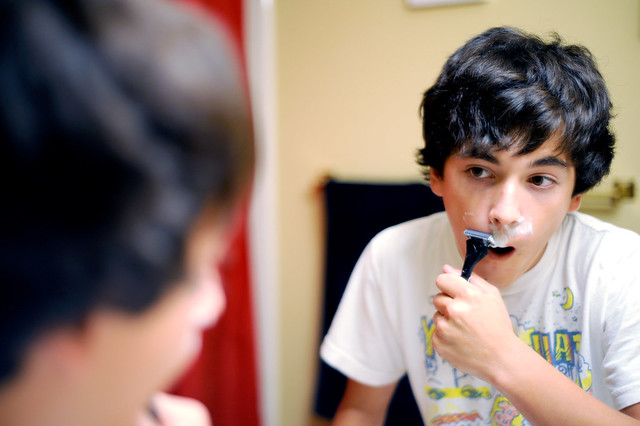