The best part is the unexpected range of responses, epecially when they seem so… simple. Maybe even plain. Today’s was a great example, it was put in the queue by me maybe 2 weeks ago. I think it was sitting in the list of submissions from some time back in December, submitted by @audyg1rl. I might guess she was a student last semester (her last tweet was a Daily Create response on November 6, 2015).

So in the spirit of the Make It So Not Hard That Mariana Funes Cringes (!) the challenge submitted was:

Invention
Make an invention of your own and give it a name. Include a price and what it does.

She did not even specify how to respond- photo? sketch? writing? working 3D prototype?

There are 12 responses as of this writing, and I celebrate their variety…

Kevin Hodgson, who has been on fire this time around with DS106, doing Daily Creates, cranking out his comics, and inventing (!) side activites. We love ya Kevin. His idea of a ballon coffee filter looks like it would add some excitement to the morning cup. Well worth the $39.95 (is that per balloon Kevin?)

Urbie, who I think works with the Maricopa system, my old stomping grounds in Phoenix, has been around DS106 a while, and picked up his pace this year. He provides a reasonable alternative to the Driverless Car, the Riderless Car. Can we call it “Thrunless”? And the price is perfect:

Jaap draws his invention in and brings it back to the Western106 theme. And he has been a solid ds106er for quite some time. I so enjoy his ideas on the daily creates

I do not know who the Undertaker (@Untertacker) is (I have my suspicions), but given that he/she does not want to dig, does that mean they live in a place with caliche? Mounds over graves, saves strain on the back, right?

Terry is new to ds106 and giving it a strong run. You cannot go wrong in my book with a meta idea, an invention that makes inventions. I bet he was the kid that asked the genie for more wishes. And bonus points for doing the old school draw on paper. And I like a machine that works be yelling into it.

And Sandy! She’s not only doing all the daily creates, she is also doing my other daily photo project. Her work is always got an original style to it, and more than just a piece of media, she makes a meaningful message. I love “The Imagination machine, priceless and inheritable”

@ds106dc #tdc1493 My response for Today's #ds106 Daily Create is The Imagination Machine. Plant it & watch it grow! pic.twitter.com/zq5XProzrK

I am guessing Tiffany is a current DS106 student at UMW, and her work from what I have seen has not only a great design sense, but thought behind it. I might be short the $1,000,000 but having a clone seems a good idea (but prone to Twilight Zone paybacks)

Mariana not only designed a realistic looking retro-diagram, but she’s got an old school font, and a kudos to David Kernohan (who’s birthday it was today. I stayed up last night crafting a special TDC for him, and somewhere it got lost in the wash).

I think Tierra is also a DS106 student, designs something I know nothing about, a lipstick container. Bonus bizarre juxtaposition points for pairing that with her Clint Eastwood icon

Ronald, another on the troop of consistent Open DS106 participants, picks up with Urbie’s idea, with the carless driver. Such a complex idea, why has Silicon Valley failed to come up with it?

#tdc1493 @ds106dc My daily create: my invention is a car-less driving device. Save the planet! pic.twitter.com/kAkp2BtGrJ

Sara is a student I think with the DS106 crew from CU Denver, and wins my prize for the practical useful invention. This can easily be manufactured from existing inventory, correct? Does it come in lipstick pink?

I'm being forced by a class to use Twitter. I guess I'll finally use it then. #INTE5665

Okay, I left mine last. I was not going to do today’s, because of preparing for a talk and a class assignment tomorrow, but then I saw this collection of responses, and wondered what I could whip together in 30 minutes.

Since there were a few tweets about MOOCs this morning (blame @dkernohan) my mind did some free association to my own web invention, the MOOC Making Machine, a site that randomly generates a bizarre name for a new MOOC.

So this is not just a sketch, this is an actual diagrammatic representation of the code that runs the site. Here let me make it bigger so you can study the details. 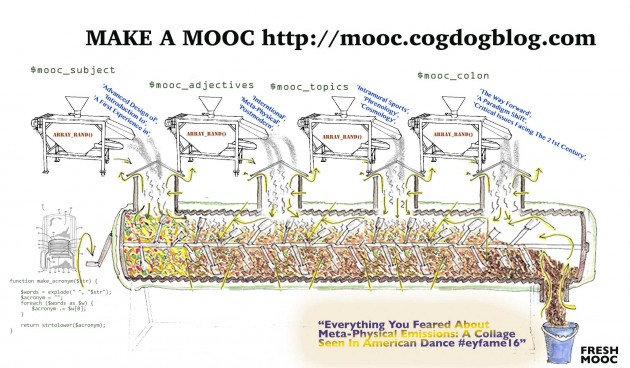 I had no luck quick searching for some kind of diagram of a mixing machine. I did however, find this sketch of a Ridan COmposter 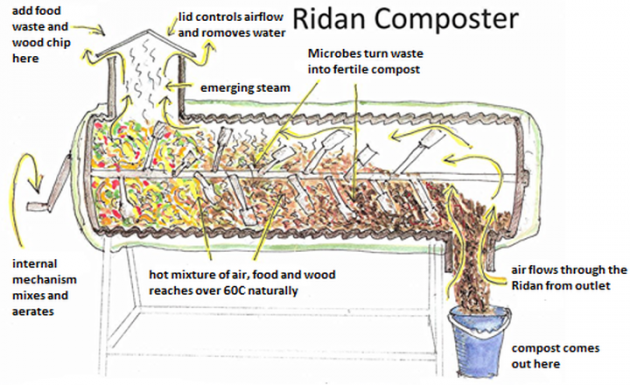 I liked the style. I opened in Photoshop, deleted the text labels and the arrows that extended outside. The code for ym site mixes together terms from four different arrays, so I first clone copied the right half of the machine to make it longer (option-click-drag with the selection tool). Then I copied the single chimney to have four of them. I erased out the bottom to make them connected to the chamber, and used the clone brush to fill in some of the missing debris. The arrows mostly flow out, so I erased their upward pointed heads, and painted them in new going down. I second layer on top with yellow paint and the “multiply” layer effect matched the style of the original.

What I wanted was some kind of sketch of something like a bag of grain emptying, but failed. I did find this kind of “hopper” to represent the part of the code that feeds the machine. I made four copies. One of the paint brush sponges made for a nice pour into the machine.

So the code for the site has four arrays of strings that it uses to randomly pull one item from to make the magic MOOC. These are thus what feeds the machine, via the php array_rand() function (the label on the hoppers). I pulled a few examples to demonstrate the flow. The four arrays are (with just a few examples from the site listed here):

More or less the page calls a function that randomly picks one from each array, and uses a second function to generate a hashtag based on the acronym of the generated name, and spits it out tot he screen.

I felt the make_acronym() function would work well in combination with the left side hand crank that mixed it up.

So there you go, a MOOC making machine. All you need is a few truckloads of venture capital– and just drive it off a cliff. This stuff comes out for free at http://mooc.cogdogblog.com/: 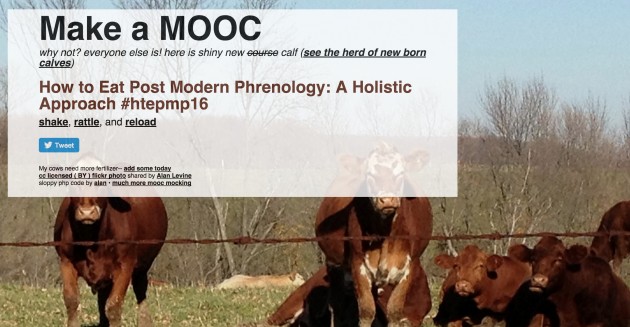 Ah, thank you @audyg1rl for triggering this madness.