Some of the best experiences doing the DS106 Daily Create are taking on one that you think is maybe not all that special, interesting, and falling into a magic shiny rabbit hole… in the act of just letting the mind fly open and also stumbling across the unexpected trigger.

I’m responsible for today’s one– I pay attention to the number, so indeed, hitting out 1500th Daily Create is definitely worth celebrating. So the task today was to do something with the number 1500.

Now just to emphasize the number- the Daily Create has not missed a beat since January 8, 2012 when Tim Owens rolled out the first site. That’s more than four years. That’s well over twice the run over the original Daily Shoot we used as an inspiration (it’s odd that someone keeps paying for the dailyshoot.com domain but the web software running the site is toast).

So 1500… I was going to start working on it, but it was about 30 minutes til lunch, so I shrugged and said, “what can I do for today’s TDC?” My first free form association was that movie from a few years ago about some number of Greek warriors. Was it 1500? 900? (well after all it was only 300). But the idea of a big number form a movie title was brewing.

Then free association went to sci-fi movies? maybe a Star Wars look? And then it hit me, the number in that range was 2001 (as in “Just what do you think you are doing, Dave?”).

My image search is the next thing- sometimes it is not with a particular visual in mind, but see what the results provide. In this case I searched Google Images (with licensed for reuse turned on, of course) for “2001 space odyssey”.

The results were mixed, but typical- movie posters, Dave’s face in the helmet, Hal’s Red Dot, various space ship models… and one little cover from a comic. Sometimes it’s the outlier that calls to you. 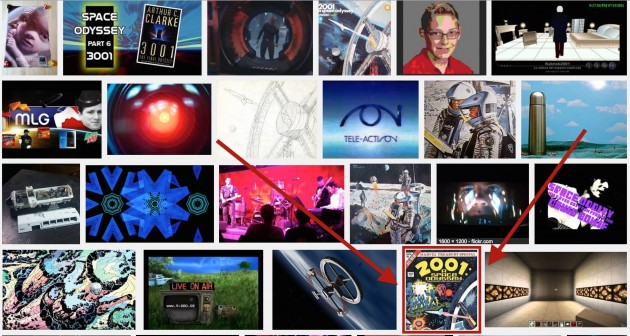 Woah, this one is definitely one I can work with. It’s from a post on a Portuguese blog called Intergalactic Robot by an educator named “Artur Rabbit” who apparently likes 3D stuff.

Here we get into the funny squishy rights quagmire. Arturo has this image of a 1976 Marvel comic in his blogpost, no attribution provided, and somehow the Great Google Mind thinks it’s licensed for reuse. Oh well, I blame Google.

(I also notice in going back to the source that there is a higher res version that the one that Google provided).

Anyhow, the comic has all the elements I need to work with. My process in Photoshop on opening an image, is to make it a bit bigger size (like at least 800 pixels in max direction. I make a duplicate of the original so I have a reference in case I both something up.

It’s a matter than of overlaying original elements with news stuff, then using brushes and especially the clone brush, to cover the old content to fill behind the new. It helps to get warmed up with smaller elements, I first tackle the “1976” in the top left. With text, I don’t kill myself trying for an exact match.

I start by trying to replicate the existing text, so I put a “1976” out there in a different color, in this case pink, and start trying different fonts, and sizes. 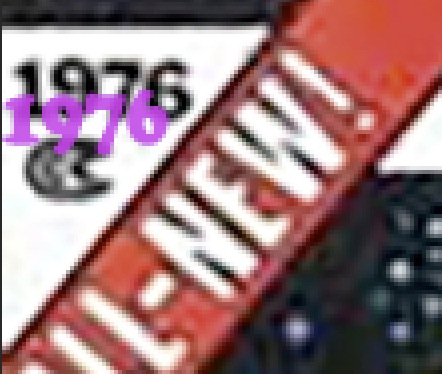 Cooper Black Regular is not exact, but has some of the rounded bob ends. And I am completely erasing an element as opposed to changing one word, the need for a match decreases. I slide it over, and then use the scale tool to try and line it up. Once I am close enough, I type in the text I really want (“2016”), and hide the layer. I then go to the background original, and in this case I can just eye dropper pick that off white background, and paint over the original.

I use the same font for that Red Title, and Cooper Black Regular is again good enough. I first turn “Marvel Treasury Special” into “DS106 Treasury Special” by replacing the first word. I later come back to it, as it’s a bit off in color texture, and actually does not make much sense, so I paint over the entire white background strip, and do the entire text as “The DS106 Daily Create”. And I can quickly use the same technique to change the price from 75p to $0.00.

The top is looking good:

To give it the curve effect I use Warp Text from the Type menu, and then the Arc effect. 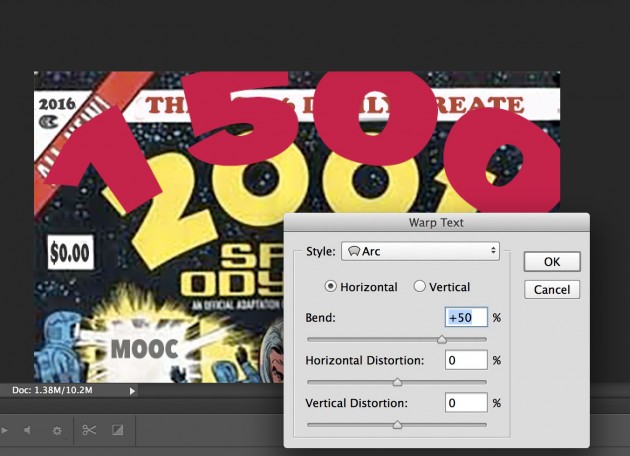 With some fiddling of the arc amount and scaling I get a pretty good overlap.

Next I look at “A SPACE ODYSSEY” and figure “DAILY” is a good replace for “SPACE”. I go a bit lazier on the font choice, and use Hobo Std, obviously not an exact match, but its got similar curves. I then stretch it a bit to overlap.

Now comes that magic again, removing the old words. I hide my new layers, and break out the paint tools. I first paint over all the text with the dark grey solid color in the back, and break out the clone brush tool to stamp over the star patterns from neighboring area.

This is the most crucial tool in the remix book. You option click from a target area, and use various brush sizes to paint that same pattern over other areas. It can take a lot of resets if the source areas is small. Since this is mostly behind text, it need not be perfect, but it’s an easy fill:

I can then re-activate my next text layers, and pick a text color that matches the other text. Sometimes a little drop on the opacity of a layer helps it not be so crisp and bright.

It’s mostly done, but I see that face figure in the middle.. 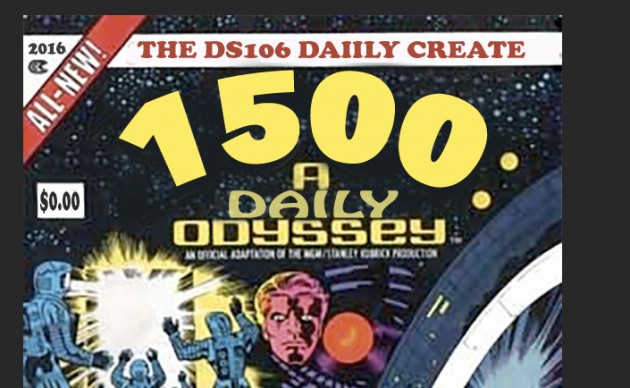 The shape of it reminds me of Jim groom’s Twitter avatar, so I lift a copy, paste it in, and resize. I used to do a lot of work to make careful selections and erasures, but my world has changed since discovering Alpha Masks. I do a close, but not perfect selection around Cotton Mather’s head, and click the Add Vector button in the bottom of the layer palette. This creates a mask- whatever is white shows through, and black masks it out:

The reason why this is better is because it is non-destructive to the original. If I did like before and worked my lasso selections and deleted the background, I lose it all. If my selection is not good, I either have to undo, or live with it. With masks, I click the black and white mask layer, and can use a paint brush to fine tone the mask. I can fine tune it, and it never destroys the original.

The mask is like something like a piece of cardboard (black) with a hole cut out (white) to see through.

If the image and mask are linked, I can resize them, move them. rotate them. If I unlink them, I can slide the original around a bit or stretch some to fill the hole. I use this a lot when I face paint someone into an original. It is THE BOMB for doing remixes. Masks have upped my game a lot (next on my list to master is Adjustment Layers).

Jim’s avatar is cut off at the top and bottom, so I open up space above and below in the mask, and use the clone brush to copy some of the hair up into an arc, and to copy some chin down below.

And then I notice the spacemen dis-oriented in the glow from a bright screen. OMG, what a gift. This is an easy joke to toss in with just text, blinded by its brilliance… 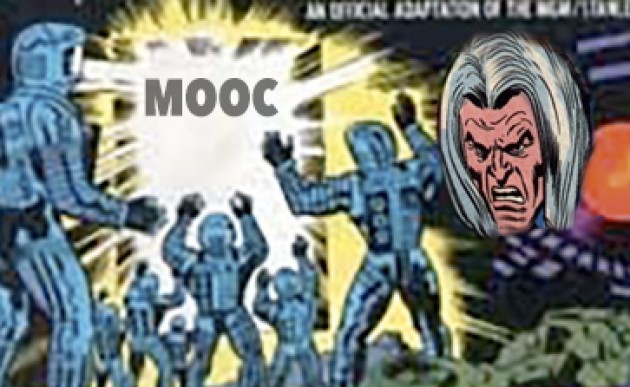 I could have toyed with some text of logos on the spaceships, but it’s got enough on it. I just use the same text match, to paint out the bottom text box, and replace it to go from “THE ULTIMATE TRIP BECOMES THE ULTIMATE ADVENTURE” (which would have worked fine, but I like to redo almost all the text) to “THE ULTIMATE DAILY CREATIVE ACTIVITY WILL NOT STOP!”

And in about 40 minutes I had this “TDC1500 Daily Create Odyssey” remix: 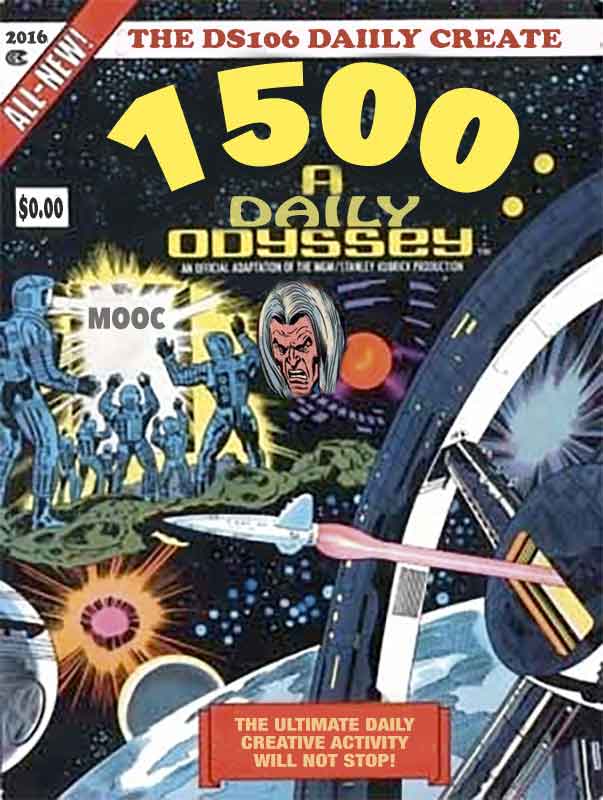 And not for self back patting, but for demonstrating to me that this stuff emerges in the process, it’s not ADDIE designed up front, nor is it starting with any first principles or theory. Creativity, the mind, the tools, it’s all one tangled-up convoluted process, and if you want to think you can just isolate one strand at a time… well good on ya.

Top / Featured Image: You do know HAL, correct? If not, please go away from the web and watch 2001: A Space Odyssey. The image is from one of probably a heap of YouTube videos featuring the red pulsing orb of HAL – the one I found was from a remix music track; itself licensed creative commons, but who knows about the rights of the original?

The font on the overlying text is called Silom Regular, I have no idea where it came from, but it has a futuristic look to it.