For reasons I fail to devise, on my trip I’ve had an eye for making GIFs, maybe it is traveling be train in that motion that is repeated. I’ve been collecting photos that seem like they might work. sometimes I try to adjust the angle to make a pair that might work well as a […]

Two more for the GIF pile of ones made not by downloading video clips, but using my own photos– the ds106 assignment is Photo it Like Peanut Butter: Rather than making animated GIFs from movie scenes, for this assignment, generate one a real world object/place by using your own series of photographs as the source […]

The Abominable Pine Man was spotted in the vicinity on December 15, 2012. Unlike the Lock news Monster, Sasquatch, the photos of this super natural creature ares sharp, clean, and obvious no fabrication or some buffoon in a fur suit. cc licensed ( BY ) flickr photo shared by cogdogblog In time the monster morphed […]

I spotted many a grain elevator in my cross country travels, but this one in Lawndale Illinois caught my attention the most, for the faint “Faultless Feed” on the side of the grain elevator, plus as a bonus it was right on Old Route 66. While snapping my photos, I saw the lights down the […]

On my trek home earlier this month, I picked off of the map a route in Kansas that would take me through the near Texas border town of “Liberal” – which I read on a plaque has nothing to do with politics– it was in reference to the sharing of water liberally by the first settler. 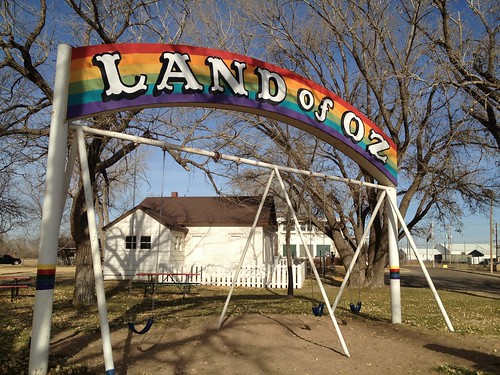 There are a number of Dorothy statues on the streets. I was intrigued of some over the shoulder photos as maybe she gazed wistfully at a fun shriner convention across the street: 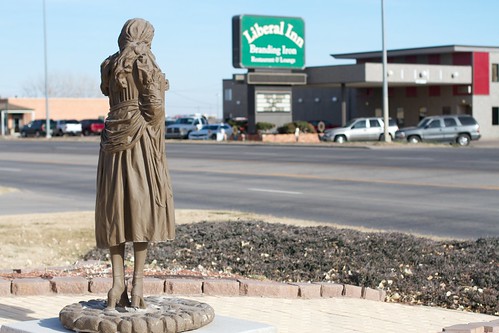 This lead me to do a series of rapid shots in succession to get the blur of traffic going by Dorothy, which I molded into animated gifs.

This is the ds106 Photo It Like Peanut Butter Assignment (created by yours truly):

Rather than making animated GIFs from movie scenes, for this assignment, generate one a real world object/place by using your own series of photographs as the source material. Bonus points for minmal amounts of movement, the subtle stuff. See a bunch of examples at http://cogdogblog.com/2012/02/10/photo-gif-peanut-butter/

And this became the seed of an idea I wanted to do as an extended story that spans multiple assignments, the task I am asking my students to do for their final project.

These were all done the same way. The photos were taken in the camera mode on my Canon 7D that does sequential shots as long as I hold the shutter. The idea is to get a lot and not move the camera much (a tripod would be a smart way to go).

Gotta feed the animated GIF bacteria that lives in my gut. I had a few sets of photos I have taken over the travel span that I took series of things in motion for the express purpose of making them animated. I did these in PhotoShop via the method blogged earlier – essentially importing files as a stack, setting frame sequences in he animation palette, and sometimes masking out to reduce the elements being animated. These will be tagged to end up in the Photo it Like Peanut Butter ds106 assignment.

First up, from the great state of New York, at the small town where I crossed the Hudspn River, I had just hopped out of the truck to take a photo of the bridge when the sound of a train grabbed my attention (I literally ran across the tracks to get the angle) – this one is 549k.

Next up, an animation from a single image. I had stopped to take a picture of Yet Another Crumbling Down Home. I really liked the look of this window and its composition, but it also looked good in black and white (same image, just converted). In this one, I masked just the inside of the frame to isolate a color change, and made the time it spent on the black and white frame about twice as long (and it is only 111k): 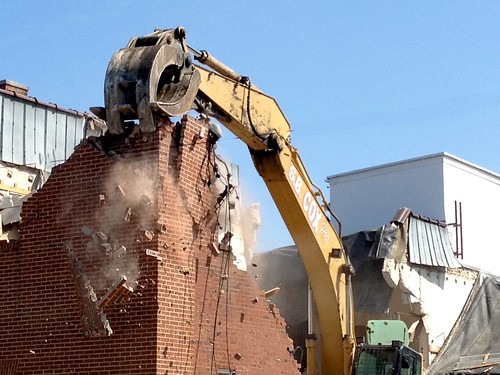 On my last day in Fredericksburg, I went to the bank to close out an account, and came across the spectacle above. There was a crowd watching, one person filming with an iPad (that still makes me laugh like a 12 year-old), plus other gawkers like me snapping photos. There is nothing like a little destruction to attract attention, and of course I started hearing music in my head

No, no I never was a sinner-tell me what else can I do
Second best is what you get-till you learn to bend this rules
Time respects no person-what you lift up must fall
They’re waiting outside-to claim my crumblin’ walls

I’m not saying any of my walls are crumblin down, but it was fun to watch that digger knock away the bricks.

So much I made it my Daily Create, which was supposed to be a 36 second video showing a 360 degree panorama.

During my hike today to see Dark Hollow waterfall (in Shenandoah National Park), I did some more experiments with doing some rapid sequence shot of the water detail. It was cloudy, but ay ISO 200 I set the aperture open enough for fast shutter speeds 1/1250, 1/3200 to freeze the motion, and taking a rapid […]

Say it Like the Peanut Butter has been a long standing popular ds106 assignment- capture a key moment in a movie in the form of an animated GIF.

Over the summer I did some experiments with using my own photos to generate animated GIFs, and I am making this into a new ds106 assignment.

Photo it Like the Peanut Butter
For this assignment, generate an animated GIF of a real world object/place by using your own series of photographs as the source material.

I have already written up a few blog posts with my method; the key is taking a series of photos with little or no movement of your camera – a tripod is strongly recommended, but I have gotten away with ones done with multiple shot mode on my Canon DSLR.

The first one I spotted in Nashville as I was fascinated by the reflections of the Cumberland river in the windows of a building (the how to was blogged as Animated GIFs from Your Own Photos):